Why I Hate Comp Tickets 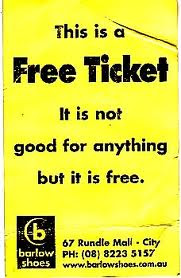 If there is one thing that can kill your earned revenue quicker than anything else, it is a misguided complimentary ticket policy. Someone asked me the other day why I hate comp tickets so much, so I decided to list my top reasons:

1. Comp tickets devalue what it is we do. For my entire career, I have watched artists struggle to make the argument that the arts mean business, and that an artistic career is just as viable an option as any other. However, these same artists then give away the fruits of their labor to anyone with the most feeble of reasons. In the past few days, a viral video entitled "Explaining the Arts Non-Profit," has been passed among my colleagues illustrating this point. It starts out with one bear saying how much he enjoys a choral group, and then asking for a comp ticket. The other bear responds by saying that putting on a concert is expensive, and would prefer it if the first bear would purchase a ticket. The first bear is befuddled by the response because he thinks the choral group is made up of volunteers who perform as a hobby. For many of us, the arts aren't a hobby--they are our livelihood, and we deserve to be compensated for work that enriches the lives of so many people.

2. People don't show because they aren't invested. Many organizations believe that they must give away comp tickets to "paper the house" in order to fill as many seats with butts when important people such as reviewers are in the audience. However, in many cases, it backfires on them. Those who receive comp tickets haven't paid anything for them, therefore they aren't invested and many don't bother to show up. An average no show rate for comp tickets is in the 30% range. Next time you are at an opening night performance, take a look at how many empty seats there are. I would bet dollars to donuts that those empty seats are a result of a faulty comp ticketing policy. Not only are organizations giving away free tickets, but they aren't even getting the results they want out of them.

3. Blood in the water. Nothing smells of desperation worse than massive public discounting and uncontrolled comp ticketing programs. You might as well put a sign on your theater that says "no need to buy because we can't give tickets away." Marketers are in the business of managing perception more than reality. Even with shows that are under performing, smart marketers have tools in their toolbox to create the perception of demand.

4. Comp tickets create box office nightmares. The old saying that "those who pay the least complain the most" definitely applies to recipients of comp tickets. Recipients of comp tickets, in my mind, are the most entitled and demanding group of patrons to serve. They demand the attention of box office and front of house staff, which in turn takes a significant portion of your limited resources away from your full paying audience.

That all being said, there are a few good reasons to use comp tickets in a controlled and well thought out strategy:

1. As benefits for full time employees and actors. In many organizations, comp tickets are an important part of the benefits offered to employees. Organizations want their employees to be proud of their work, and knowledgeable about what is on stage, so offering them complimentary tickets is well worth the loss in revenue.

2. For members of the press. Press members who have agreed to cover a particular performance should be offered a comp ticket. However, do not give out comp tickets to press who haven't agreed to coverage. If a press member wants to see a performance but isn't going to cover it or your organization, it is more than acceptable to ask them to purchase a ticket. Just because they are a member of your credential press corps doesn't automatically entitle them to a free ticket.

4. As a professional courtesy. Most organizations have a vested interest in other artists seeing their work. Agents, casting directors, affiliated artists, artistic directors, and producers comprise most of this group. In some cases, if a relationship is exceptionally important, offering comp tickets would be appropriate. In many cases however, a discount for industry professionals will work just fine.

In closing, here are a few quick thoughts on developing a comprehensive comp ticketing policy for your organization:

1. Create a budget for comp tickets. Used in much the same manner as an expense budget, this allows an organization to plan for a given number of comp tickets each year for various purposes. Make sure to get buy-in from all members of senior management as they will be responsible for managing the comp tickets for their departments.

2. Develop very clear instructions on how comp tickets are to be distributed. The key to a good comp ticket policy is clarity. Make sure your policies are easy to understand and simple to follow. For fairness, it is important that the same policy be in effect for your entire organization. Once a clear and concise policy is created, stick to it.

3. It's like a crack addiction--it will be tough to wean people off of them. If your organization has a serious comp ticket problem, you might need a couple of years to turn it around. Be prepared...you will piss people off. But we are talking about the livelihood of the organization and its artists. Why would anyone want to buy a ticket if they know that your organization gives them away at the drop of a hat? It will be tough, but worth it. I promise.
Chad M. Bauman at 10:46 AM